Larry
Larry is one of 10 children.. He has 4 brothers who are Navy Seals, one who is a hit man for the government, and one who is a three star general. Another of his sisters is a drill sergeant, and apparently she’s one tough cookie. He has 3 daughters, a son, and 3 sets of twin grandchildren. I’ve diagrammed what I know, in order to make it simpler, of course. 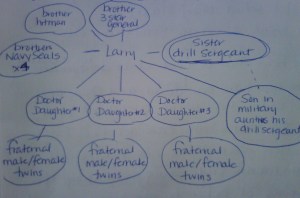 His hitman brother apparently has killed over 70 people for the US government. One good reason to be nice to Larry.

Larry’s son went into the military as well, as you can see. “I hit the jackpot!” he told Larry when he found out that his aunt was to be his drill sergeant. Then she sent him on a 15 mile hike to buy some bread. When he returned, she was irate that he and his crew had retrieved white bread instead of wheat, and promptly sent them all back for a second 30-mile roundtrip errand for the proper item. He’s been home for 7 years and still won’t speak to his aunt. Guess he didn’t hit the jackpot after all.

Larry had lots of advice for BethyGirls 1 & 2. He made sure to inform them that men are dirty little creatures and will say ANYTHING to get what they want. His analogy went a little something like this:

“Boys are a lot like ice cream. You know how you have one bowl, and then, once you’ve had a taste, you want another? Well, if you have too many, you can get fat. Too many boys – you can also get fat. (insert big belly arm motion indicating pregnancy.) You know how long it takes to get pregnant…? The thing is, while you’re young, you have to decide – do I want to have a career, and be independent? Or do I want to stay home and raise kids?”

Now, normally, I would have interjected here that either one is a respectable choice..at the proper time, of course… but I figured the girls were smart enough at that point of the conversation to take what he said in the proper context. We’ll have that discussion later.
Some other interesting fun facts about Larry:
• He has put 11 people through medical school.
• He bought each of his 3 daughters a house. (not sure about the son)
• When he visits his grandkids, they all examine him, as they also aspire to be doctors when they grow up. “By the time I leave, I have 20 or 30 bandaids,” he remarked.
• His ex-wife was his babysitter. How’s that for an interesting story? I wonder if he’ll be there next week; I couldn’t ask with the girls there.
• He lost 6.2 million dollars in stock when Washington Mutual went under.
• He’s a ‘gas/electric service technician’ according to the embroidery on his shirt
• His formal education ended at 3rd grade.
• His favorite singer is Loretta Lynn, and his all-time favorite movie star…ugh… escapes me. I’ll be trying to remember it for the rest of the day. Crapola.
• He knew Elvis personally, and once was flown to an island (the girls say Hawaii, but I don’t recall) for a peanut butter/jelly/bacon/banana sandwich. Elvis ate 2, Larry had a half one, and couldn’t go to the bathroom for 3 days as a result. In his words, “Elvis was the first person to make me constipated.”
• One day, Lisa Marie, as a child, kept running into Larry with her tricycle. She wouldn’t stop, so Larry swatted her with the back of his hand on her diapered, rubber-pantsed bottom. She limped the rest of the day in dramatic protest.

Carlos
Carlos roared over to our outside table, sat down next to Larry, and immediately started telling jokes. I mean, he didn’t skip a beat. I would gladly repeat his monologue if I had understood even half of it. I laughed and laughed, not because of the content, but his spot on, well-oiled-machine type delivery. George Carlin was one of his good friends, (and did a great impression of him as proof) along with Jennifer Lopez. He met them both in Altamonte, don’t you know.

He told me about his brother, Adam Jr, who had died at the young age of 52. He was still broken up about it as he was telling the story. Apparently nobody in Carlos’ family knew how to reach him, but a friend read the obituary in the newspaper and called him. Carlos flew up, “had it out” with his sister in law, and proceeded to meet up with his good friend Joe Pesci , since he was in town. When he told Joe about his brother, Joe cried. “That’s just the kind of good man he is. He cried for my brother,” Carlos told me. “After that I sold my plane, because I knew I’d never leave Florida again.”

Carlos then offered donuts to Larry, the girls, and me. We had just eaten, so we politely declined. At that, Carlos decided he was going to leave, because he had no napkins. “I don’t know why I just told you my life story, “ he said before he walked away.

I don’t know either, really. But I’m glad he did. And I’m glad Larry the technician decided to come outside and regale us with his wisdom as well. Do I believe it? Not really, even though he showed me Lisa Marie’s number in his phone and told me he could call her anytime he wants. Part of me hopes every bit of is true.
I love people. And their stories. Somehow those 2 hours and those 2 men made me better.

Kate wrote about the experience too. Here’s her version. I like it.

“Some people just make me think sometimes. When you meet people as nice as Larry
and carlos and how they just randomly came into our lives it makes you wonder
if you were ment to listen to what they have to say. I might not ever know
what part i was supposed to hear but it sure did make me think! I think that
every thing happens for a reason and that means that maybe that i am ment to be
a docter or that maybe abby is or maybe that we should always plan ahead so we
can alway be the best that we can be. Carlos i think was more pointed towards
me (if the whole everything happens for a reason thing is true) he so
funny,random, and not afraid to be himself. People think that if your rich and
everybody thinks you can make yourself cool than life for you is perfect but
its not true! Carlos showed me that you can be amazing just by being yourself
and Larry showed me hat money doesnt buy happiness, happiness buys happiness. I
have never really a more interesting experience ive ever been in in my whole
life! i hope to always remember the conversation i was a part in at dunkin
donuts. 🙂 I love dunkin donuts.”

So there ya go. Good day.

The ongoing saga of my indecision and foibles. It's fun. View all posts by thebethy